Since 1929, Allied Arts Guild has been a peninsula landmark.

Since its inception, it has been a place for artists to come together and share their wares. Today, the Guild’s artists use their studios not only for creating, but also as retail space for the public to view and purchase their beautiful art. Our artists today range from jewelry designers to fashion designers to interior designers and everything in between.

Our stunning gardens are beautiful to walk through, and docent-led tours are available Monday through Saturday. Docents discuss not only the gardens, but the history of the Guild and its art and architecture.

The complex is owned and operated by the Allied Arts Guild Auxiliary. Our mission, along with the six other auxiliaries, is to raise funds to support uncompensated care at Lucile Packard Children's Hospital Stanford. The Artisan Shop at Allied Arts is staffed entirely by our volunteers, and all our profits are donated to the hospital.

In addition to our shops, the Guild is also a perfect place to host a party – from a small baby shower to a wedding ceremony and reception, our Events Director can make your vision become reality!

Allied Arts is conveniently located at the southern end of Menlo Park, near Stanford Shopping Center.

Allied Arts Guild stands on part of what was once a vast 35,250-acre land grant dating back to the late 1700s. A king of Spain, probably Charles IV, ceded the property to Don Jose Arguello, commander of the Presidio of San Francisco. It was called Rancho de las Pulgas, literally "Ranch of the Fleas"!

In 1929, wealthy art lovers Delight and Garfield Merner bought 3.5 acres of the land located at the edge of Menlo Park, part of the Jeff Murray farm. Working closely with architect Gardner Dailey and artist Pedro de Lemos, they began to realize their dream of creating an arts guild in California. The Merners' goals were to provide a serene, beautiful workplace for artists; to encourage the crafting of handsome objects for everyday use; and to support all peasant or folk art, especially that of early California.

The Guild's iron and wood shops were the first in operation because they were needed in the construction of the rest of the complex. The original Murray barn and sheds on the grounds were preserved, and the main building was constructed on the framework of the old Murray farmhouse. New buildings of Spanish Colonial design were added. Ansel Adams was the Guild's photographer of record and took the first interior and exterior photographs shortly after the buildings were completed.

Delight Merner was a talented, self-taught decorator with a great sense of color. She believed that blue was a difficult color to use for interiors but was a perfect color for outdoors, where it set off green foliage and reflected the sky. Her garden furniture was always painted blue.

The gardens were inspired by the gardens the couple had visited in Spain and were named in the Spanish manner: The Court of Abundance, at the entrance to the main building; The Garden of Delight, or Blue Garden; and Cervantes Court, the inner courtyard featuring a mural of Cervantes dedicating "Don Quixote" to his patron, Count de Lemos.

Paths were paved with stones from nearby San Francisquito Creek; and the tiles and objects of art used to decorate the walls were brought from Spain, Tunis and Morocco. Mosaics and frescoes were executed by Maxine Albro and the de Lemos family. The Guild's logo was designed by Mr. de Lemos, who arranged the letters AAG in a monogram depicting a boat sailing upon a tranquil sea. 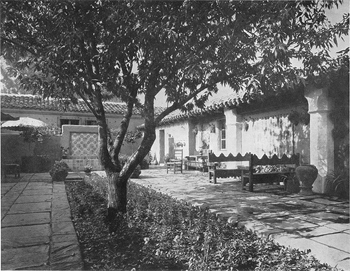 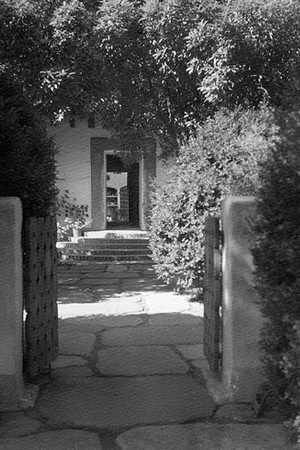 The artists who occupied the studios were chosen on the basis of the quality of their work, since, in Mrs. Merner's words, "Every object which goes from the Guild must measure up to a certain standard of fine design and craftsmanship."

The Merners retired from active operation of Allied Arts Guild in 1935 and leased the complex to the Home's Senior Auxiliary. Later, Allied Arts Guild Associates, Inc. bought the property and continued to operate it for the Home's benefit. In 1951, the Allied Arts Auxiliary assumed its trusteeship and management. This auxiliary has been landlord, shopkeeper, supporter of the arts and protector of this historic site since that time.

Members of the Allied Arts Auxiliary also staff the Artisan Shop, noted for its exquisite hand made art pieces and lovely vintage items.

The Artisan Shop is operated by volunteers solely for the benefit of children who need medical care. Lucile Packard Children’s Hospital Stanford, once the Convalescent Home, receives all profits from Allied Arts Guild for aid to critically ill children.

To Reserve a Private Event: